The U.S. trademark office is an administrative agency and not a court. Yet it makes judicial decisions by accepting or rejecting a trademark for registration. If a trademark applicant desires that a "real judge", a judge appointed and confirmed under Article III of the Constitution, determine whether a trademark should be registered, the applicant has an important choice to make.

If a trademark is denied registration, and if the applicant seeks a judicial determination as to the correctness of this decision, the applicant can either appeal the refusal to register to the Federal Circuit or the applicant can sue the PTO Director in a de novo proceeding in federal district court.

In either case, the denial of registration by the trademark office is examined by an Article III judge. But the consequences are different, as is made clear in last week's decision from the Fourth Circuit in Shammas v. Focarino. The Fourth Circuit pointed out that an appeal to the Federal Circuit will overturn a registration rejection only if the PTO's refusal to register is not supported by substantial evidence. On the other hand, the applicant's institution of a new lawsuit in federal district court will permit the applicant to introduce new evidence, will force compliance with the federal rules of evidence, and will permit the Article III trial judge to review the issues de novo.

So, why would an applicant not want de novo review, rather than substantial evidence review, by an Article III judge? Because the Fourth Circuit explains that the Lanham Act imposes a significant financial penalty on the applicant in doing so. That is, the applicant is required to pay the PTO's expenses, including reimbursement of the costs of PTO lawyers and staff, whether the applicant wins or loses in district court.

The Federal Circuit explains that --


"... §1071(b)(3) imposes a unilateral, compensatory fee, including attorneys fees, on every ex parte applicant who elects to engage the resources of the PTO when pursuing a de novo action in the district court, whether the applicant wins or loses ..."

The Fourth Circuit underscores that the Lanham Act penalizes an applicant who seeks to have a judicial determination made de novo by an Article III judge as opposed to an Article II appointed administrator. So, even if the federal trademark office is completely wrong in its refusal to register a trademark, the right of the applicant to seek de novo review pursuant to the federal rules of evidence will cause the imposition of a substantial financial burden -- even if the applicant wins!

In the Shammas case cited above, the penalty imposed on the applicant amounted to some $36,000, representing the time incurred by the PTO's staff attorneys and paralegal. This was the price imposed on the applicant who merely wanted de novo review pursuant to the federal rules of evidence by an Article III judge.
Posted by Michael M. Ratoza at 5:06 PM No comments:

More News on THE SLANTS

The Federal Circuit today vacated its decision from last week and elected to have the full court conduct an en banc review. See my blog post of April 20th for background information about last week's court decision.

The issue on en banc review is: "Does the bar on registration of disparaging marks in 15 U.S.C. § 1052(a) violate the First Amendment?" Note that the Lanham Act prohibits the registration of trademarks that "consists of or compromises immoral, deceptive, or scandalous matter; or matter which may disparage or falsely suggest a connect with persons living or dead ..."

Under the existing legal test, the Federal Circuit last week determined that the name The Slants for an Asian band is disparaging to a prominent number of Asian Americans and therefore cannot be registered as a trademark, although the band can continue to use the name without registration for its band.

Email ThisBlogThis!Share to TwitterShare to FacebookShare to Pinterest
Labels: More news on The Slants

The Trademark Trial and Appeal Board (TTAB) confirmed again two days ago what we should all know, that generic trademarks will not be allowed to register. In In re Meridian Rack & Pinion dba buyautoparts.com, the applicant sought registration of "buyautoparts.com"

Generic marks, observed TTAB, are "common names that the relevant purchasing public understands primarily as describing the genus of particular goods or services." The important issue turns on whether the consuming public views the applied-for trademark as constituting the "central focus" or "key aspect" of the service set out in the application.

The TTAB "has often held that a term that names the 'central focus' or 'key aspect' of a service as generic for the service itself."

The TTAB opinion finds buyautoparts.com as generic for the service of operating an online retail store where consumers can buy auto parts. The opinion gives other examples of applied-for trademarks that were previously rejected for genericness, either because the mark describes the genus of the entirety of the goods or services, or describes the genus of the key element of the goods or services:

Email ThisBlogThis!Share to TwitterShare to FacebookShare to Pinterest
Labels: No Registration for Highly Descriptive -- Generic -- Trademarks

Skyrocketing Patent Filings in the Eastern District of Texas

One would think that the propensity of the Federal Circuit in mandating transfer of patent cases out of the Eastern District of Texas (Tyler, Texarkana, Sherman, Marshall, Lufkin and Beamont, Texas) would cause a slow down in new patent case filings in that district. Indeed, out of apparent exasperation with what it describes as an "unrestrained and improper" use of mandamus by the Federal Circuit, EON Corp. IP Holdings, a patent troll, filed a petition for writ of certiorari to the Supreme Court seeking review of perceived mandamus abuse. That petition was denied yesterday.

But EON has it all wrong. Whether or not the Federal Circuit is overly aggressive in compelling the transfer of patent cases out of the Eastern District of Texas, the fact remains that this one judicial district is the recipient of more new patent case initiations than any other individual federal district in the country.

The administrative arm of the U.S. Courts published recently its annual statistics for the period ending September 2014. Regarding patent cases, the numbers show that there has been a skyrocketing increase in new patent cases filed in the Eastern District of Texas during 2014, which continues an ongoing trend. Here are the numbers:

A line chart is revealing: 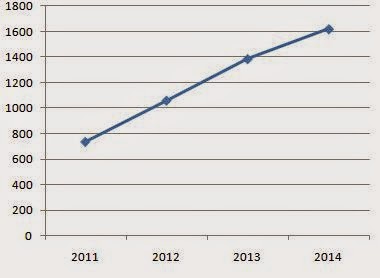 There has been over a 119% increase in new patent case filings in the Eastern District of Texas during the past four reporting years. No other judicial district has received this much new business from patent plaintiffs. Indeed, out of 5,686 new patent cases filed nationwide in 2014, this one district received 28% of these new filings.

So, whether or not EON is unhappy, it appears that plenty of other plaintiffs are satisfied with the Eastern District of Texas.

Email ThisBlogThis!Share to TwitterShare to FacebookShare to Pinterest
Labels: Skyrocketing Patent Filings in the Eastern District of Texas

THE SLANTS: No Registration for a Disparaging Trademark

The Slants found no respect at the federal trademark office, and now they have no respect from the Federal Circuit Court of Appeals.

The Asian American rock music group The Slants has sought to obtain a U.S. trademark registration for THE SLANTS for some time. But the group was turned down initially by the federal trademark examiner under a Section 2(a) finding of disparagement.

The federal trademark law prohibits registering a mark that "consists of or comprises immoral, deceptive, or scandalous matter; or matter which may disparage or falsely suggest a connection with persons, living or dead, institutions, beliefs, or national symbols, or bring them into contempt, or disrepute."

The trademark examiner determined that the mark would be disparaging to people of Asian descent. The group appealed to the Trademark Trial and Appeal Board (the Board), which upheld the examiner's rejection, stating that "it is abundantly clear from the record not only that THE SLANTS ... would have the 'likely meaning' of people of Asian descent but also that such meaning has been so perceived and has prompted significant responses by prospective attendees or hosts of the band's performances."

I wrote about the question of registering THE SLANTS as a potential disparaging trademark in my January 7, 2015 blog post.

The band appealed the Board's refusal to register to the Federal Circuit, and today the appellate court affirmed the refusal. In a unanimous opinion, the Federal Circuit panel had little problem addressing the band's contentions under established trademark law. The band argued that the mark, THE SLANTS, is not disparaging. But the Federal Circuit agreed with the Board's finding that one meaning of the term "slants" refers to people of Asian descent, and that this meaning may be disparaging to a substantial composite of these people.

The band raised several constitutional issues, all of which were rejected by the Federal Circuit. The band argued that the refusal to register violated its First Amendment free speech rights in that the refusal suppresses the band's expression. The court, however, pointed out long standing case authority that a refusal to register is not a prohibition of use, and that the band can continue to use the mark and exercise its expression without a registration.

The band next argued that the standard to determine whether a mark is scandalous or disparaging is vague. But the Federal Circuit, while acknowledging that it may be "inherently difficult in fashioning a single objective measure like a substantial composite of the general public from the myriad of subjective viewpoints," nonetheless determined that the standard was not unconstitutionally vague.

The band argued that it was deprived of due process, arguing that the trademark office applies the disparagement standard arbitrarily and without clear guidelines in that the PTO has registered other marks that contain slurs against homosexuals, such as DYKES ON BIKES. But the Federal Circuit pointed out correctly that the band had a full opportunity to prosecute its trademark application and to appeal the refusal to register, so its procedural due process rights were not denied.

Lastly, the Federal Circuit addressed the band's contention that the rejection of its trademark application violated its equal protection rights. Here, the band argued that the trademark examiner rejected its application based on the race of the band members. The court, however, determined that the refusal to register was not based on the band's ethnicity but on the disparaging use of the term. The court observed that the use of the same term in the same manner by an all white band would receive similar treatment.
Posted by Michael M. Ratoza at 12:32 PM No comments:

Email ThisBlogThis!Share to TwitterShare to FacebookShare to Pinterest
Labels: THE SLANTS: No Registration for a Disparaging Trademark
Newer Posts Older Posts Home
Subscribe to: Posts (Atom)