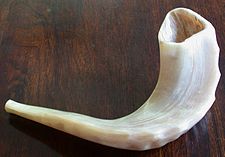 New York Senator Charles Schumer may be experiencing a bit of xenophobic tendencies in his newly submitted bill, S. 1536. This proposed legislation, sponsored by only two other accomplices (Sen. Casey and Sen. McCaskill) seeks to require all U.S. businesses that outsources "customer service communication," via phone or wire, to (1) require that the physical location of the customer service assistance must be disclosed at the commencement of the communication, (2) require U.S. businesses to certify compliance annually to the FTC, and (3) authorize the FTC to penalize businesses that fail to comply.

I'm wondering if this type of legislation is really needed. Does this sort of bill speak more to the fear of foreign workers? The location of a call center is not important. Most people would be surprised that when they place a call to a Miami-based cruise line that they are likely speaking to a call center off a land-locked freeway interchange in Springfield, Oregon. This is but one example of how modern communication technology allows the placement of call centers anywhere in the world. The issue should not be where the call center is located. The issue, rather, should be whether the person on the other end of the line knows how to schedule a cruise, answer a question responsibly, and communicate well.
Posted by Michael M. Ratoza at 9:27 AM No comments:

Is it scandalous? Look in the dictionary!

Is the design of a bottle, shaped to resemble a hand flipping the bird (a hand with the middle finger extended), scandalous and therefore not subject to trademark registration in the U.S.? Here is the proposed mark: 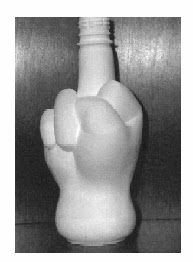 Luxuria, s.r.o. sought to register the mark depicted by the shape of the above bottle. The examining attorney took the position that this proposed mark is scandalous and not entitled to registration in the U.S. The matter was appealed to the TTAB, and the refusal to register was affirmed. The TTAB, citing existing law, confirmed that scandalous material cannot be registered, and confirmed further that vulgar material is scandalous for purposes of denying registration. Of note, the TTAB held that for purposes of defining whether material is scandalous, the PTO examiner can rely on dictionary definitions alone.


Dictionary definitions alone, if a term has no other meaning, are sufficient to satisfy the Office’s burden of showing that the mark is scandalous to a substantial composite of the general public.

Indeed, the examining attorney cited to several dictionary definitions of giving the bird to establish that, as far as lexicographers are concerned, the gesture is scandalous. So there you have it. If you can't tell whether material is or is not scandalous, look in the dictionary.
Posted by Michael M. Ratoza at 8:59 AM No comments:

The White House's website contains a We The People section, allowing common folks to petition the government via the web. The White House promises that it will respond to each petition that amasses a threshold number of e-signatures within a stated period of time. The present threshold is 5,000 e-signatures within 30 days of petition posting. There have been numerous petitions posted, but the one petition that has accumulated the most number of e-signatures in the shortest period of time (over 11,000 signatures in four days, so far) seeks to prevent the issuance of any further software patents in the U.S., and to cancel the software patents that have issued. Here is the text of the petition:

We petition the Obama administration to:

The patent office's original interpretation of software as language and therefor patentable is much closer to reality and more productive for innovation than it's current practice of issuing software patents with no understanding of the patents being issued.

Under the patent office's current activity, patents have been come a way to stifle innovation and prevent competition rather than supporting innovation and competitive markets. They've become a tool of antitrust employed by large companies against small ones.

To return sanity to the software industry - one of the few industries still going strong in America - direct the patent office to cease issuing software patents and to void all previously issued software patents.

Posted by Michael M. Ratoza at 8:28 AM No comments:

F. Scott Fitzgerald was born in St. Paul, Minnesota on this date in 1896. A distant counsel of Francis Scott Key, for whom he was named, Fitzgerald could not carry a tune, but boy could he write!

Posted by Michael M. Ratoza at 9:36 AM No comments:

Notice: My blog address is migrating from us-ip-law.blogspot.com to us-ip-law.com. Same great blog, just at a different site.
Posted by Michael M. Ratoza at 3:55 PM No comments:

One prerequisite to copyright protection is fixation. A work must be fixed in a tangible medium so that the embodiment is sufficiently permanent or stable to be perceived for a period of more than "transitory duration." So sayeth the Copyright Act. Under this statutory definition of fixation, is a garden filled with shrubbery and flowers fixed? The Seventh Circuit does not think so. Last February, the Seventh Circuit determined that the constant growth of plants in a garden destroyed the fixation, and thus the copyrightability, of a garden. And three weeks ago, the federal court in California (Kim Seng Company v. J. & A. Importers, Inc., CV 10-742) held that there cannot be copyright in a sculptured food dish, determining that food is perishable and, well, not fixed.

I don't know about anyone else, but I can store an arrangement of food on a plate in my refrigerator for more than a "transitory duration." I did so in college and I still do so. This is just the way it is in real life! Indeed, an examination of my refrigerator will reveal food that has been sculptured on a plate for days. Since copyright is not claimed in taste, but in appearance of food on a plate, a several day chill-out in my frig is not "transitory." As for the Chicago public garden, if the shrubs and flowers in Chicago grow as slowly as mine on the Pacific Coast, is a shrub and flower display really transitory? Just because a lawn is mowed weekly does not mean that  there cannot be a lawn sculptor, right? I mean, aren't brass statues polished periodically? Aren't old paintings touched up every decade or so? Aren't photos enhanced, cropped, stapled, mutilated and put back together?

Does the Supreme Court really need to explain the meaning of transitory to us?
Posted by Michael M. Ratoza at 11:12 AM No comments:

The Sound Recording Simplification Act (H.R. 2933) was introduced in the U.S. House last week, seeking to extend U.S. copyright protection to sound recordings fixed before February 15, 1972. Presently, §301(c) of the U.S. Copyright Act provides that federal copyright law does not preempt the common law and statutes of any U.S. state with respect to sound recordings fixed before February 15, 1972. This preemption prohibition drops out in 95 years – by February 15, 2067. The newly proposed legislation would delete this section entirely to provide exclusive Copyright Act protection to these sound recordings – now.

All the great hits of The Beatles, The Rolling Stones, Buddy Holly, Charlie Parker, The Beach Boys, The Big Bopper and more, that were fixed prior to February 15, 1972, are presently protected by local and state laws, including criminal laws, right of publicity laws, and a patchwork of other laws. This lack of uniformity, consistency and clarity in protecting this material has been a concern to librarians, historians, archivists and other users. On the other hand, the music industry has developed a comfort level, for the most past, with the present system by creating contract-based relationships and contract work-arounds.

Recorded radio broadcasts of the Four Horsemen, recorded civil rights speeches, recorded scholarly lectures and interviews by Faulkner, Einstein and others, and a host of additional historical material, would be protected in a uniform and certain manner by extending the exclusivity of the Copyright Act to these sound recordings.

Frankly, it makes sense to bring all copyrightable work under the wing of protection of uniform federal copyright law. The development of new digital technologies that permit enhanced access to new and historical works can best be regulated under a definitive and uniform national law. Since the present Copyright Act is the vehicle for national protection of all copyrightable work, except for pre February 15, 2067 sound recordings, the elimination of this singular exception will assist the uniform protection of all work in the face of new technologies.

“Where have you gone Joe DiMaggio …”
Posted by Michael M. Ratoza at 10:18 AM No comments: