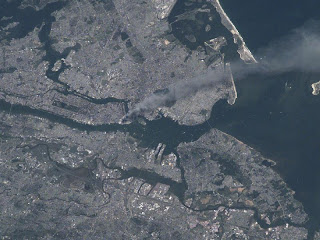 I was in Windows on the World a few months prior to September 11. I was in New York in May 2001 on business and had concluded my meetings one day by early afternoon. Somehow I was able to catch an unoccupied cab and, with no apparent goal in mind, somehow ended up heading to the south of Manhattan. The cab dropped me at the lower level entrance to the North Tower of the World Trade Center. I saw the line waiting for the express elevator to the top floor. The attendant explained that it was too windy that day to allow visitors onto the roof. I remember the attendant. I bought a ticket and took the longest direct elevator trip that I had ever been on up to the top floor. I remember the ticket salesperson and the elevator operator. Windows on the World occupied the 106th and 107th floors of the North Tower.

I got off at the top floor and walked through the darkened dining room and into the bar area. The lounge occupied a large, open area that was quite bright. The sky was overcast that afternoon but the many windows allowed considerable natural light to flood the room during mid-day. The bar serving area covered one side of the lounge. I remember the bartender. The opposite side of the lounge had a band stand with a drum set, microphones and other gear set up and ready. The band stand was made of black wood, and in front of the band stand was an oak colored, woodened dance floor.

There were not many people in the lounge at that time of the afternoon, it being too early for happy hour and the financial markets not having closed. I remember the waitress who took my drink order. I remember the few people sitting at the bar and at side tables. I carried my drink around the room, looking out the windows. I walked over to the southeast side of the floor and saw the South Tower so close that I could almost reach out and touch it. I had never seen the horizon before from that high up, except in a plane. I looked directly down and, from that height, could not see the too small people at street level. I got a bit of acrophobia and quickly moved away from the windows. I walked over to the south side of the floor and, looking out the window from a few feet distant, saw the Statute of Liberty and Staten Island. The boats in the harbor were miniature toys.

Sometime after I returned to Portland from that trip, I attended a dinner function in Portland sponsored by the University of Oregon. I ran into a good friend from law school days whom I had not seen for some time. I asked him where he was on September 11. He explained that his office at that time was in the Pentagon and that he was supposed to be at his desk that morning. However, he and his wife had returned to Washington late the prior evening from an extended trip to Europe. As such, he got up later than normal. He saw the smoke from the Pentagon attack from the front of his home.

Of course, the attacks on the Twin Towers and the Pentagon were not the first sneak attacks by an enemy on U.S. soil.

In the late 1990s, I was in Honolulu and took a tour of the Arizona Memorial. The tour was offered by the National Park Service and included a land-based news reel and audio presentation of the 1941 Japanese attack on Pearl Harbor. The tour also included a boat ride across the harbor and out to the Arizona Memorial, were you could see the bubbles of oil still floating to the surface from the sunken ship, with the dead seamen remaining at rest in the metal wreckage below the water line. An older member of this tour became emotional and asked the park attendant how the country can avoid a similar incident in the future. I recall him asking "What can we do so that this never happens again?" The green uniformed park official, wearing his Smokey the Bear hat, must have received similar inquires during the course of his duty, and responded that the government had much more sophisticated radar equipment to prevent another surprise attack from occurring. The emotional tour member, and all the rest of us, were comforted by the response.

We now know that the attack on December 7th and on September 11th did not occur due to the lack of radar or other forms of intelligence. Lower level information gatherers had access to revealing data prior to each of these attacks. Higher level intelligence analyzers, however, failed to connect the dots.
Posted by Michael M. Ratoza at 9:10 AM