A ball park constructed on cheap land in a backwater area of Boston has become over the past 100 years a national treasure. Boston's Fenway Park hosted its first professional baseball game on this date 100 years ago: April 20, 1912. Then, the Boston Red Sox beat the New York Highlanders (later renamed the Yankees) 7 - 6 in 11 innings. 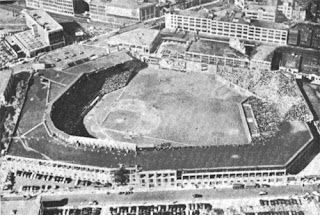 There aren't many things that survive and remain useful for 100 years. Many large, modern ballparks have been constructed in other towns that are sterile and uninspired (e.g., the old Riverfront Stadium in Cincinnati and the ugly Kingdome in Seattle, now each thankfully torn down and replaced). Many recent parks have gone for the retro look (Baltimore's Camden Yards started this trend twenty years ago). But Fenway doesn't need the retro look -- it is retro! Indeed, its foul lines are now too short, its seating capacity provides a challenge for last minute ticket buyers and parking stinks. But it's a good thing to appreciate oldness. Not everything old needs to be destroyed and rebuilt. Sometimes old things, like the U.S. Constitution, stand the test of time.