When Does The U.S. Government Not Own The Rights To A War Memorial?

The City of Washington perhaps has more memorials, including war memorials, than any other American city. But does the federal government really own the rights in these memorials? The ongoing litigation between sculptor Frank Gaylord and the United States reveals what happens when the U.S. fails to adequately secure the copyright, or at least a perpetual license, in its war memorials.

Frank Gaylord is a prominent sculptor of "The Column," a group of 19 sculptures depicting a platoon of U.S. foot soldiers in the Korean War. "The Column" is the centerpiece in the Korean War Veterans' Memorial on the west end of the National Mall in Washington, DC.

The Korean War was as brutal as World War II. Some sources peg the U.S. war dead in excess of 33,000, plus more than 8,000 MIAs. In honor of the sacrifice and service to the U.S. during the Korean conflict, Congress in 1986 passed legislation putting in process a mechanism to develop a Korean War memorial. The Army Corps of Engineers was responsible for selecting the memorial's design team, Cooper-Lecky Architects of Washington, DC. Frank Gaylord, a well-regarded sculptor, was selected to craft the sculptural works. He began working on this project in 1990. His sculpted soldiers were assembled into the memorial, and depicted on a sunny day as follows: 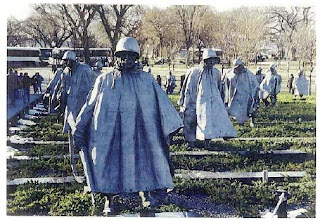 The memorial was dedicated in July 1995 and has become a favorite venue on the National Mall. In 2002, the U.S. Postal Service elected to issue a stamp to acknowledge the 50th anniversary of the Korean War armistice. The stamp, depicted below, -- 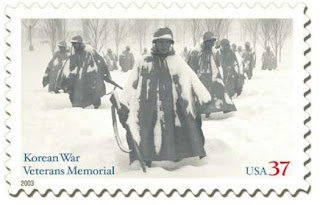 Frank Gaylord sued the United States in 2006 for copyright infringement. Following trial in the Court of Claims, the Federal Circuit in February 2010 determined that Gaylord was the copyright author of The Column and that the U.S. government was liable for infringement. The case was remanded to establish damages. The first Federal Circuit opinion is located here.

On appeal for the second time, the Federal Circuit reversed the nominal monetary award. A copy of the second appellate opinion is here. The Federal Circuit criticized the Court of Claims for limiting its analysis of the damage award solely to the Postal Service's position that it would never pay a 10% royalty. On the contrary, the Federal Circuit explained that, in establishing a copyright damages award against the federal government, "the court should not arbitrarily cap this award at $5,000 simply because the Postal Service claims it has never paid more to license a copyright for use on a stamp."


"Defendants cannot insulate themselves from paying for the damages they caused by resting on their past agreements and by creating internal 'policies' that shield them from paying fair market value for what they took."

The Federal Circuit observed that the test for copyright damages is not based on what the infringer would prefer to pay. Indeed, the amount of damages for this present claim of infringement may be unrelated to prior royalty agreements of either of the parties.

"The court should keep in mind that Mr. Gaylord's recovery is not limited to the Postal Service's actual profits. * * * Indeed, the court may find that a hypothetical negotiation between the parties would result in a higher ongoing royalty that the rate earned by Mr. Gaylord or the Postal Service under past agreements."

While it will be interesting to learn how the trial court resets the sum that the Postal Service will be required to pay Gaylord for nonpermitted use of The Column images, a much more fundamental question presents itself. Why must the government ever be required to pay for use of the image of a beloved memorial, particularly when the memorial was undertaken pursuant to federal legislation, involving federal money, located on federal ground, and depicting federal military personnel in U.S. sponsored military action? There is no question that Frank Gaylord's creativity and artistic talents resulted in a magnificent war memorial honoring brave wounded, dead and missing military personnel. But why did the government lawyers and procurement staff not include a perpetual copyright license or, better yet, a copyright release to the federal government for use of The Column?