Where Have The Trademark Cases Gone?

A review of the annual case filing statistics published by the Office of Federal Courts reveals that new trademark infringement filings in federal courts have been dropping while new patent and copyright filings have been increasing. 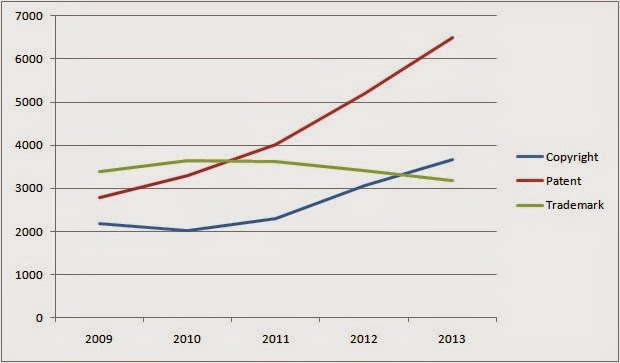 In a few months, the Office of Federal Courts will publish its new statistics for the period through September 30, 2014, and it will be interesting to see if these trends continue.

For the year ending September 30, 2013, the report identifies the following top five federal districts for new filings of copyright, patent and trademark claims:

C. New Trademark Cases:
The California Central federal district appears to be the most balanced in terms of the close number of new patent, copyright and trademark filings. Delaware and the Eastern District of Texas are the most out of balance, with their IP focus almost completely on patent cases.
Posted by Michael M. Ratoza at 3:46 PM

Email ThisBlogThis!Share to TwitterShare to FacebookShare to Pinterest
Labels: Where Have The Trademark Cases Gone?