An Example Of Bad Patent Quality

The ability of an economy to grow is related to the restraints on development. Particularly important, restraints come each day from the Patent Office in the form of newly issued patents.In 2011, for example, the U.S. Patent Office issued 247,713 patents of all types, representing an average of 678 new patents issued each day, or 28 new patents each hour of every day.

But certainly not all patents are good patents. Some are bad, and the bad patents restrain the economy without benefiting the greater good in a manner consistent with the requirements of the Patent Act. Are there really bad patents? You bet. Consider this one: 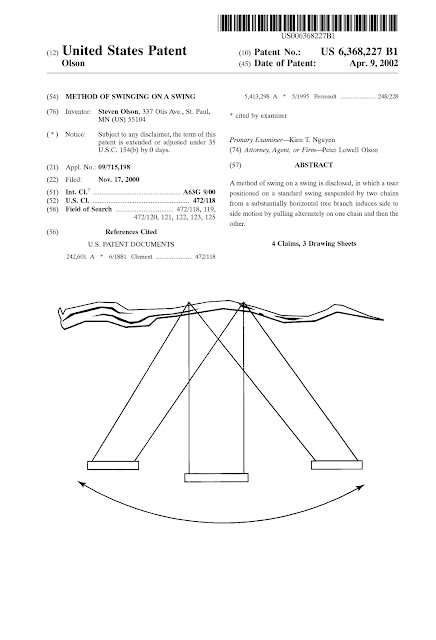 The above Patent No. 6368227 (issued on April 9, 2002) grants a monopoly to a "Method of Swinging on a Swing." The inventor, Steven Olson of St. Paul, Minnesota, claims to have invented a "a new and improved method of swinging." Reading carefully the patent claims confirms to everyone but the most naive that this invention has been practiced by all of us years -- indeed, decades -- ago in our backyards. So why did the Patent Office issue this patent in the first place? No idea, but the good news is that it only took about a year for the Patent Office to reexamine the patent and cancel all claims (reexamination certificate dated July 1, 2003).


Or, consider this patent: 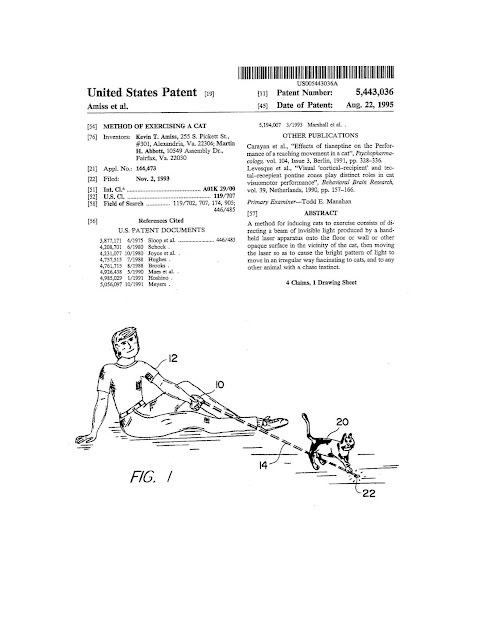 Pat. No. 5443036 was issued August 22, 1995 for a "Method of Exercising a Cat" by having the cat chase a beam of light. Many cat owners have used a light for this purpose, and many cats understand what it means to chase a light beam. Perhaps these cats know more than the examiner who approved this patent.

That these bad patents should never have been issued is certain to most of us. That the quality control of the Patent Office allowed these patents to issue should be shocking and upsetting to all of us. Not only does it cost the taxpayers money for the Patent Office to issue obviously bad patents, but the economy is not helped  when bad patents restrain economic growth. Bad economy, bad Patent Office.