Who Defines a Trademark Design? 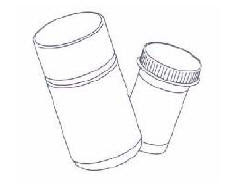 precedential opinion from the TTAB reinforces the practical difficulty in defining -- at times -- a design trademark. In In re Pharmavite, the applicant's drawing defined its design mark as representing two bottles, depicted on the left.

In the applicant's specimen, the bottles were depicted differently, according to the examiner and the TTAB, depicted below, left. The specimen sought to display the actual use of the trademark on the goods in commerce. In doing so, the TTAB held that the mark changed from the two-dimensional design in the drawing to a three-dimensional depiction on 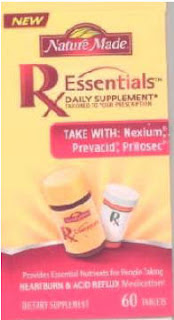 the goods packaging, with the in-use design modified by the accompanying labels and words.

The design in the drawing consisted of two stylized pill bottles, with one bottle slightly overlapping the other, and with no labels or words. The stylized design appearing on the specimen, however, added additional features to the pill bottle design, including labels and, on one bottle, the words NATURE MADE and RX ESSENTIALS and, on the other bottle, the wording RX.

The TTAB explained that the commercial impression made by the design on the specimen is that the entire stylized design consisting of both the stylized bottles plus the labels and wording constitutes the mark. The TTAB rejected the contention that the background design of the two bottles, partially hidden by the accompanying labels, are separately recognized as the trademark apart from the label and words.

The issue of adding additional elements to a stylized mark is important for purposes of communicating the correct source identifier to the consuming public. If a simply designed mark is enhanced with additional components for display to the public, there is a serious question as to which portion of the mark and added components will be recognized by the public as the true mark -- is it the simple design initially envisioned by the applicant or the simple design buttressed by added elements? If the simple mark becomes confused by the public, and if the commercial impression on the public includes the additional elements beyond the simple design, then an important issue for the PTO and TTAB relates to the identification of the true trademark.

There are many examples of stylized designs in conflict with in-use design enhancements that have been refused registration. In re Boyd Coffee Co. is cited in the opinion, and there are many others, as well. In the Boyd Coffee case, the applicant's drawing of a stylized coffee cup and saucer was enhanced with similarly colored star bursts emanating from the coffee cup. The TTAB held that the drawing and specimen were in conflict, and that the mark presented in the drawing was thereby incomplete and unregistrable.