The Forfeiture of Le Marché

On November 16, 1981, the monotype Le Marché, created by Camille Pissarro, was stolen from the Musée Faure in the Alpine town of Aix-Les Bains in southeastern France. The print was transported into the U.S. by the alleged thief and consigned in 1985 to an art gallery in Texas, where it was ultimately sold to a corporate buyer. Sharyl Davis eventually acquired possession of the print in 1992 from its prior corporate owner and displayed the work in her home for more than ten years. Ms. Davis consigned the print in 2003 to Sotheby’s for auction. The French National Policy became aware of the impending sale of Le Marché and notified U.S. law enforcement who, in turn, requested that Sotheby’s withdraw the work from auction; and Sotheby’s complied. In 2006, the U.S. government brought a civil forfeiture action seeking to recover possession of Le Marché for return to France.
Faure Museum:

Contentious litigation thereafter ensued between the U.S. and Ms. Davis culminating in the recent decision by the Second Circuit Court of Appeals.﻿ The court held that notwithstanding Ms. Davis' status as an innocent purchaser, the stolen print was subject to civil forfeiture under U.S. customs law.
The print, Le Marché: 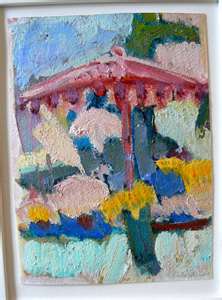 Specifically, in a two-step analysis, the government brought a claim under the customs law, 19 U.S.C. §1595(a), a part of the Tariff Act of 1930, that authorizes the forfeiture of merchandise brought into the U.S. contrary to law that is stolen, smuggled or clandestinely imported or introduced. The government argued that the print was stolen and brought into the U.S. contrary to law in that the possession or sale of stolen goods with a value of at least $5,000 that has moved in interstate or national commerce with knowledge that the goods are stolen violates the National Stolen Property Act. Because the thief stole the print, valued at more than $5,000, from the French museum and imported the work into the U.S., the government maintained that the National Stolen Property Act was violated and the print was subject to civil forfeiture under the Tariff Act.

Ms. Davis argued that she was an innocent owner, but the Second Circuit confirmed that the innocent-owner defense does not apply to a civil forfeiture claim under the customs law. "Indeed, the Supreme Court held, in a case addressing another provision of the Tariff Act of 1930, that 'forfeiture may be enforced even against innocent owners . . . . The penalty is at times a hard one, but it is imposed by the statute in terms too clear to be misread.' General Motors Acceptance Corp. v. United States, 286 U.S. 49, 57 (1932)."
The Second Circuit was mindful that the civil forfeiture law rendered a harsh result for Ms. Davis. Nonetheless, the return of stolen artwork that was introduced into the U.S. in violation of the customs laws represents the law and the enforceable position of the U.S., even when the art is presently owned by an innocent party. In this context, the rule of "buyer beware" aptly applies to art, particularly international art.
Posted by Michael M. Ratoza at 10:09 AM