A Memorial Day for Vietnam -- At 50 Years 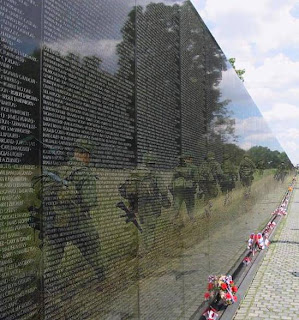 This Memorial Day 2012 marks the remembrance of the 50th anniversary of the U.S. involvement in the Vietnam War. President Obama will mark the beginning of a 13 year war remembrance on Monday, May 28th.


NOW, THEREFORE, I, BARACK OBAMA, President of the United States of America, by virtue of the authority vested in me by the Constitution and the laws of the United States, do hereby proclaim May 28, 2012, through November 11, 2025, as the Commemoration of the 50th Anniversary of the Vietnam War.

The U.S. was involved militarily in Vietnam one way or another since the mid-1940's, including assisting in what became a disastrous French defeat by the Viet Minh at Dien Bien Phu in 1954.

The first American soldier killed in Vietnam during the U.S. war? Air Force T-Sgt. Richard B. Fitzgibbon Jr. His is the first name on the extreme western panel of the Vietnam War Veteran's Memorial.